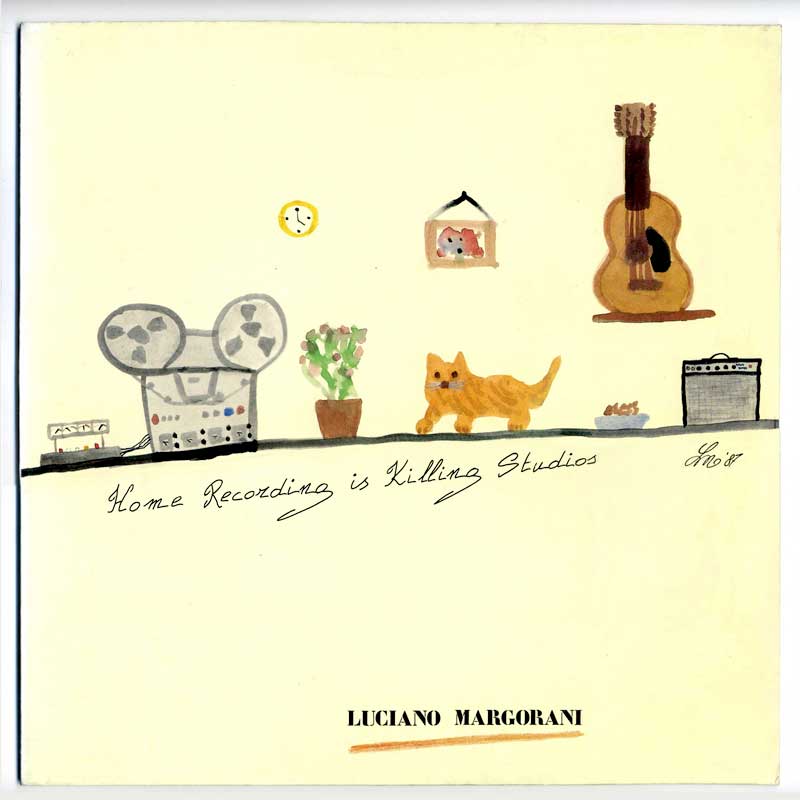 ADN: Who inspired your guitar style?

LUCIANO: I could answer no one: on the contrary, due to the fact that normally I’m a sincere person, I could make a list of about 50 guitarists that I appreciate and who were fundamental to shape my actual style. But considering available space, I will only name two of them ROBERT FRIPP during my youth and recently BILL FRISELL.

ADN: How did you decide to make a  solo record?

LUCIANO: I only decided to publish it as a record as I already had ¾  of it recorded… I made the recordings for fun, when I had time. Afterwards PIERO CHIANURA , the other member of LA1919, encouraged me to realize the project.

ADN: How was your collaboration with the label AYAA?

LUCIANO: I don’t see why! Material featured, beside some affinities, shows many differences concerning my work in the group; furthermore I decided alone, what to do and what not to do on the record, starting from the recordings to the label.

ADN: What kind of relationship do you have with music?

LUCIANO: I would describe it as a partial relationship; this depending on the fact that my real work takes most part of my time. This thing doesn’t disturb me so much, also because if I had lived only for music I probably would have stopped long ago.

LUCIANO: We already have the recordings for a new album, which we hope we will publish a.s.a.p., we  are looking for the right label; we also started the recordings of new material for a new project and  we are trying to intensificate our concerts considering the fact that during last years we only made 3 or 4 concerts per year.

ADN: When did you start your collaboration with PIERO CHIANURA?

LUCIANO: At the end of 1980; we both found ourselves with some friends to play our favourite songs on acoustic guitars. So we discovered to have many affinities concerning musical tastes; a little bit later we've started our home recordings as LA1919.

LUCIANO: This was a necessity mainly in order to reproduce our recordings on stage,  but also to experimentate new musical solutions; in any case LA1919 is always PIERO and myself, but we are open to external collaborations.

ADN: Which is your relationship with FRANCO FABBRI (STORMY SIX)?

LUCIANO: We are friends and we respect each other: FRANCO helped us very much through last years, and we are very grateful for that….anyhow we are not relatives and even not actionists of the same society…..ending with jokes, when we knew him he was very interested in our work . I already knew who he was because of STORMY SIX but PIERO didn’t at all!

ADN: Which were your last concerts?

LUCIANO: As I  already told you, they are very few, and this depending on the lack of our initiative. Lately we started to make concerts abroad  at 102  in Grenoble. We also participated in contemporary music series “musica del nostro tempo” in Milan and in the Festival “Ear Nerve 2 “ of  Neaples. In the future we will play some concerts in Switzerland.

ADN: Will you also  play live, with LA1919, some of the material featured on your solo album ?

LUCIANO: I was thinking about it lately, even if I could not play it alone because the album was not conceived in order to be played live…I probably will try to play some pieces with the help of PIERO, ANGELO and  FABIO during LA1919 concerts.

ADN: How important is for you to play live?

LUCIANO: Playing live, is an unique and galvanizing experience, even if not always amusing because you have to keep too many things under control. LA1919 is mainly a studio group, so a concert is something completely different, where improvisation plays a fundamental role. Probably, the most amusing aspect of a concert , is to discover that a track we conceived in studio evolves in a completely different way!

ADN: Which question would you like to answer, in order to close our interview?

LUCIANO: Which are respectively my favourite book, film and record of  the first 6 months of 1989?  The book is "Awakenings" of Oliver Sacks; The film is " The casual tourist" by L. Kasdan and the records  "Oranges and Lemons" by XTC and "Before we were born" by Bill Frisell.